The following images represent a selection from the 2008 “Capturing Carbon” Image competition (click on images for enlargements). Many thanks to all those who entered, the judges were impressed by strong field!

Pencils of graphite or Graphite of pencils Pencils of graphite or Graphite of pencils Irene Suarez Martinez, Institute of Materials Jean Rouxel, Nantes, Francen Graphite is a black mineral, the most common form of carbon, used in the core of pencils. Graphite is made from layers of carbon atoms, in each layer the atoms are packed in a hexagonal ‘honeycomb’ array. Curiously, if pack a bundle of pencils they also adopt the same hexagonal packing. The picture shows just such a bundle of pencils with an atomistic model of a graphitic layer superimposed in order to show the link between the macroscopic and nanoscopic worlds. 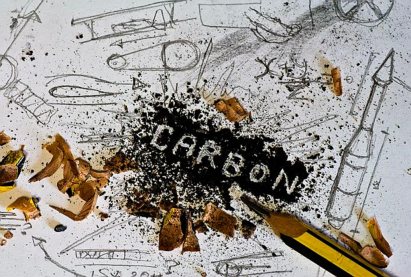 Fundemental carbon Lewis Bush, University of Warwick The idea behind this was that as well as being integral to any kind of invention or technology, carbon is usually the medium through which these inventions are first brought to life through the humble pencil, a tool which has arguably contributed more to human knowledge than any other.

The Fullerenes The Fullerenes Calvin Davidson, Sussex University The path that was to lead to the discovery of the Fullerenes, including C60, famously began with an investigation into the possibility of clusters forming from interstellar Carbon. This image juxtaposes the “Magic Sequence” Fullerenes (C24, C28, C32, C50, C60 and C70) as predicted theoretically by Kroto1 and observed experimentally by Cox et al2, against a striking image of the Helix Nebular produced by the Hubble space telescope. 1 H W Kroto, Nature 329, 529 (1987) 2 D M Cox, K C Reichmann, A Kaldor, J. Am. Chem. Soc. 110,1588, (1988)

Carbon Nanoforms Carbon Nanoforms Karl G. Nyman, Nyman Digital Arts, and Simon C. Benjamin, Materials Department, University of Oxford This image shows the creation of carbon ‘peapod’ nanotubes, an experiment performed regularly in the Materials Department at Oxford. C60 ‘buckyballs’ are sucked inside the tubes by the van der Waals force. The buckyballs have an additional nitrogen atom in their core — the quantum ‘spin’ associated with this atom may offer a means to store information in future technologies. Here we see six nanotubes winding around one another to form a ‘nanorope’. This rope will be unraveled in a later experiment so that individual nanotubes can be deposited onto a surface and connected to metal electrodes.

Neutron Activated Graphite Neutron Activated Graphite. Lorraine McDermott, School of Materials, Manchester Autoradiographic image of neutron activated graphite from the British Experimental Pile Zero (BEPO) nuclear reactor core. The core was operational from 1948-1968 with a final decommissioning date scheduled for 2022. Autoradiography produces a visual distribution pattern of radiation, where the specimen is the source of the radiation. Autoradiography therefore provides information on the distribution of radioactivity within a sample. This information is being used to understand how thermal and leaching treatments may reduce the activity of nuclear graphite waste. The area of this autoradiography image is 6 x 9 mm. Hot (i.e. red) colours indicate higher activity.

The Space Elevator Calvin Davidson, Sussex University The basic idea central to a space elevator, or orbital tower, was first discussed by Konstantin Tsiolkovsky in 1895 and the concept was examined in more detail by Yuri Artsutanov in 1959. However, most observers would credit Sir Arthur C Clarke, who passed away this year, with the idea’s introduction into popular culture in his 1979 novel, “The Fountains of Paradise”. Here, a bundle of carbon nanotubes rises to orbit from the Maldives, the closest equatorial location to his adopted homeland of Sri Lanka as a homage to the great man’s vision.

Unnoticed Inventor Lewis Bush, University of Warwick This was a similar idea to “Fundamental Carbon”, only visually I wanted it to be less obvious, I wanted it to look like the shavings from a engineer or scientists pencil which had just been cast aside, but which were fundementally key to the job they were doing.